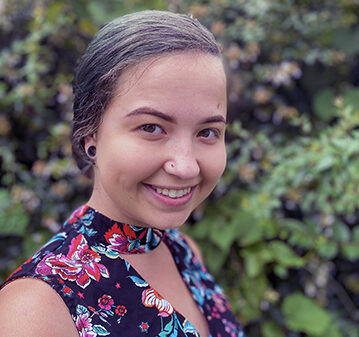 How did you know the Honors College was right for you?
I grew up in a small town where everyone kind of knows everyone and I never left; I even went to preschool with a handful of people in my graduating class of high school. What really drew me to the Honors College was the sense of community, as well as smaller classes and stronger professor-student relationships. The Honors College forced me to make connections with other students even before my first class at UNCG began which really helped me transition from a small town to a big university. I felt like I immediately belonged somewhere on campus and that gave me the confidence boost I needed to reach out and become a part of more groups and clubs. Living in the Spencers was a pretty big plus, too.

What has been your favorite Honors experience so far?
This sounds very cliche, but studying abroad really has been the highlight of my time at UNCG so far. Initially, I had planned on joining the Honors College and dropping out because there was no way I was going to study abroad. I made lots of excuses but the reality was that I was afraid to go. With lots of little pushes of love from friends, family, and UNCG faculty, I decided to actually go to Uruguay and study for five months. I came back feeling rejuvenated and fluent in Spanish. If it wasn’t for the Honors requirement to study abroad, I would have never even considered it. Thanks to the Honors College, and especially Julie Boyer, for giving me those pushes and helping me broaden my horizons.

What does “Honors” mean to you now that you are here at UNCG?
To me, “Honors” used to mean that I was the smart kid. Now, in my fourth year of undergrad, “Honors” means to challenge myself both academically and mentally to grow as a professional and as a person. It’s community, it’s growth, it’s learning about a different culture, it’s acceptance of yourself and others. Also, it’s still being the smart kid, which is pretty cool.

Copyright © 2022. UNC Greensboro. All rights reserved. | If you have a disability and are having trouble accessing information on this website or need materials in an alternate format contact smparke3@uncg.edu for assistance.